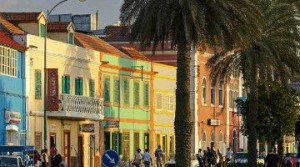 Cape Verde is a group of sub-tropical and volcanic islands in the Atlantic Ocean with a beautiful weather all year round. The former Portuguese colony is situated about 460 kilometers off the coast of Senegal (Africa). Fly only 2 more hours to the south from the Canaries and there is the Cape Verde archipelago. For example, it is only a 6 hours flight from Amsterdam or London. Each island is unique and different. Kilometers of white and sandy beaches, historical towns, unspoiled nature, whales and turtles, pleasant weather, great food and a Portuguese atmosphere. An ideal holiday destination for everyone! The Cape Verde archipelago consists of 12 islands of which 9 are habited. Its location relative to the wind makes it possible to make a split between them. In the north the upper wind islands are located and in the south you will find the lower wind islands. The islands differ greatly from each other, which makes it so unique. Each island has its qualities and is suitable for certain activities such as surfing, hiking or enjoying beautiful beaches. In the south, the islands of Santiago, Fogo, Brava and Maio form the lower winds islands. Santiago is the largest island of Cape Verde. The capital Praia on Santiago has a rich history. Other southern islands are Fogo and Brava. The island of Fogo has an active volcano with a summit of nearly 3 kilometers. Brava is also known as the green oasis and is the smallest habited islands of the Cape Verde archipelago. The last island that belongs to the lower wind part is Maio. This islands also has beautiful white beaches.

How to get there?

You can get to Cape Verde by air and sea. There is a daily flight service, international and national flights. International airports are on the islands of Sal, Boavista, Santiago and Sao Vicente. From these islands you can take an domestic flight to one of the other islands. Check for airline tickets and all domestic airline connections the page with airline information.