Carnival is one of the annual highlights for most Cape Verdeans. Throughout the year the people are looking forward to this exciting festivity. Carnival is therefore celebrated very intensely. The carnival festivities exist from big parade cars, exuberant outfits, a lot of colors, dance and a lot of music. Therefore, it is not surprising that Cape Verde, together with Brazil and Trinidad and Tobago, belongs to the best three tropical carnivals. Cape Verdeans really know how to party well! 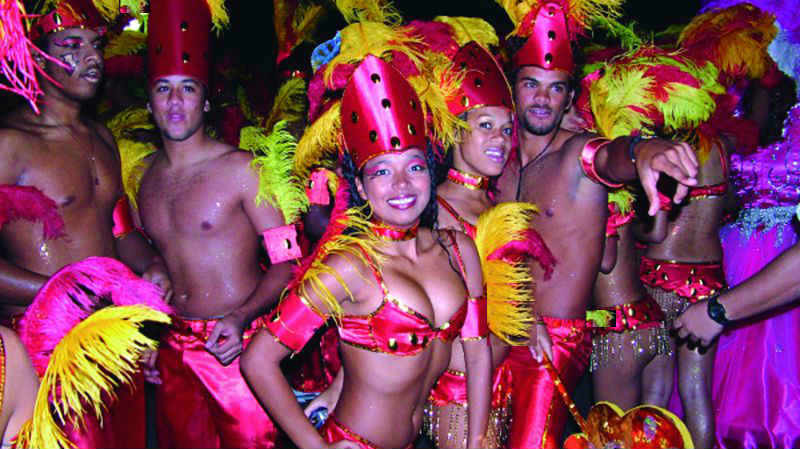 There cannot be colors enough the Cape Verdeans. During carnival, the population can present itself to her most beautiful. People show their colored and usually homemade carnival costumes during the parades. The parades with parade cars have different themes and colors. The dancers do their utmost to excel and the musicians make world-class music that is famous for Cape Verde. Everyone joins to make it a great festivity and of course to win one of the prestigious prizes. Spectators are with thousands in the narrow streets. They cheer and join the festivities with them. To control the bustle of the enthusiastic spectators, there are so-called mud boys’. These are boys smeared with mud that run on the side of the parade. Anyone who blocks the parade is smeared with mud. An effective way of crowd control.

The carnival life for a day

How does a day’s carnival look like if you are celebrating it on Cape Verde? What can you expect? To get some idea we have described a day to of celebrating carnival. A day of carnival in the city of Mindelo on Sao Vicente:

“We have been to Sao Vicente for a few days now, and we have seen the first shows and little parties. This late afternoon we see a parade of schoolchildren in handmade costumes. Above the sounds of drums, tambourines and rattles the children sing beautiful songs. And the mothers dance very well. The sun is setting and the parties will move into the small clubs indoors. After dinner we will go to bed early in order to be fresh and enjoy the parties fully. The next day we notice that the local people get going slowly. The population is preparing for the festivities that are going to come and are saving their energy. The shops are closed and only a few people walk through the streets. We just meet a group of local people who are preparing their costumes. They are rehearsing the dances to perfect everything and then show them to the public later on. After almost a year of preparation, the party will start as soon as possible. You feel the tension hang in the sky. We walk another round along a part of the route divided into colors. The route runs along the pink colored town hall, green city square and along the main tribune. Here the dignitaries inspect the parade and later hand out the prizes for the best dancers. 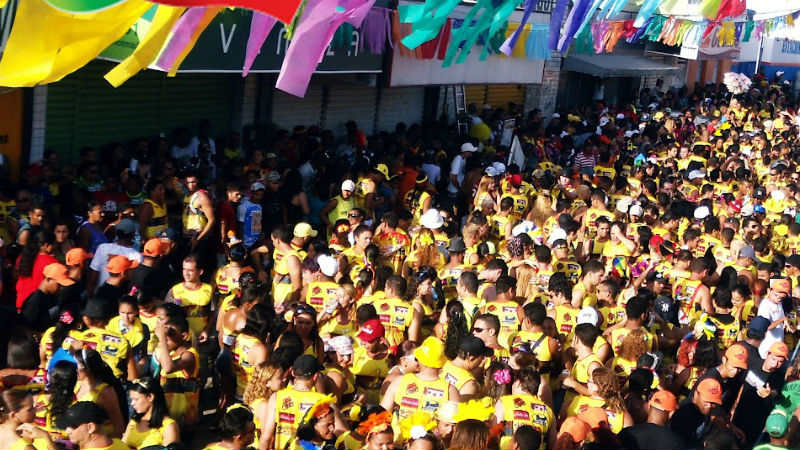 After lunch, it starts to get busy in the streets along the route of the parade. When the parade begins, people are really everywhere. Not just the streets are full, but people are also on the balconies, on top of containers and even on the high roofs. Large impressive parade cars with lots of music and dancers come along. Several themes pass, from dragons to castles. On the high platforms, amazing dancers dance in gorgeous outfits in the colors red, gold, silver, green and blue. The dancers wear head tails with long feathers. What a unique picture! The audience is totally captured by the music. On the music of drums people who walk between the parade cars also dance. A group of dancers has dresses that remind of a rainbow with many feathers. Each group has its own costumes, dance and music. The cheering from the audience continues. Also the famous ‘mud boys’ come along. From top to toe they are smeared with mud and everyone goes out of the way if they walk along. Nobody wants to get mud on his clothes. It works so well!

The festivity will continue. By the evening we enjoy various live music performances of the world famous Cape Verde music. Young and old are present here. Swirling rhythms are alternated with more sad songs. Music that we will definitely listen to again when we are home. Later in the evening, Cape Verde and Latin American dance music is played. The dance floor vibrates with dancing and by night the tent is full. This party will go on for another couple of hours … and we will join it.” On which islands is carnival celebrated?

Cape Verde celebrates carnival on every island, but the festivities are the greatest and most exuberant on the islands of Sao Vicente and Sao Nicolau. It belongs to one of the largest annual events in Cape Verde. At Sao Vicente carnival is taking place in Mindelo and Sao Nicolau in Ribeira Brava. During carnival, the streets on these islands are very lively. The people do everything to dress up. There are parades and lots of parties. Given the great reputation of carnival on Cape Verde, there is a huge demand for airline tickets and accommodations. Do you want to celebrate carnival on the islands? Then be on time with planning.