The Cape Verde Islands are very well known today for the turtles that can be seen at different beaches. Especially the loggerhead turtle (Caretta Caretta) is very common. An encounter with a prehistoric sea turtle is an unforgettable experience. Which turtle species are there in Cape Verde? What does their life course? Where can you spot turtles? When is the best chance to see baby turtles crawling to the sea? 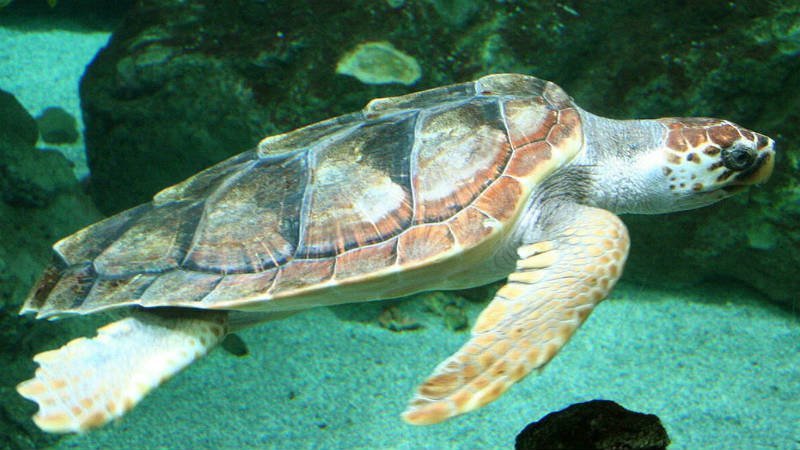 Five of the seven sea turtles are found in the waters around the Cape Verde islands. All have the status of endangered or seriously endangered species. For the loggerhead turtle, the beaches of Cape Verde are one of the most favorite places in the world to make their nests.

Leatherback turtle (Dermochelys Coriacea)
The leatherback turtle is the largest sea turtle in the world and can reach a length of no less than 2.5 meters. They have a leathery scale and occur worldwide. The turtle nests are incidentally found on the beaches of Cape Verde.

Caret turtle (Eretmochelys Imbricate)
The sea turtle is also called the real loggerhead turtle. The name caret comes from the back shield. With an average length of 90 centimeters the real loggerhead turtle is a medium sized sea turtle. They have a sickle-shaped mouth to extract prey from rock crevices. You find this species especially in coral reefs and rocks and they are well recognizable by their beautifully crenated and marked back shield.

Loggerhead turtle (Caretta Caretta)
This is one of the most widespread sea turtles in the world and it is named after their large head. Their head can be as long as 30 centimeters. The loggerhead turtle also belongs to one of the largest and heaviest sea turtles in the world. The weight of this species is between 75 and 130 kilograms and the length of their shield is about 1 meter. The loggerhead turtle spend most of their lives at sea. The females only come alone on land to lay their eggs, also on the beaches of the Cape Verde islands.

Green turtle (Chelonia Mydas)
The green turtle is of all kinds the largest sea turtle and is also called the soup turtle. This name is due to the fact that humans have often caught this species for consumption. The back shield of an adult specimen is about 1 meter and is brown rather than green. The weight of the turtle can reach up to about 160 kilograms.

When the nesting season starts, the female turtles return to the place where they were born. There they also lay their own eggs again. The loggerhead turtle burrows her eggs in the sand of the beach. The babies are born after about 60 days and then crawl to the sea. They swim and float at the Atlantic for the first 15 years. These are also called the ‘lost years’. The loggerhead turtle swims no less than 12,000 kilometers through the ocean. Eventually only 1 in 1,000 turtles grows up and survives all the dangers of the ocean. After 20 – 30 years, the adult turtles return to their native beach in Cape Verde. Turtles use the magnetic fields of the earth as a compass to find the way back. The turtles become more than 50 years old.

Where and when can I see turtles in Cape Verde?

You can spot the turtles on each of the islands of the Cape Verde archipelago. Especially around Boavista, Sal and Maio are many breeding areas. The biggest chance to see turtles is when the turtles come to the beach to lay their eggs. This happens in the period between June and November. After about 60 days the young turtles are born. With a bit of luck you can spot the turtles in the sea.

Besides spotting the turtles yourself, you can also go with nature conservationists. They can tell you all about these beautiful animals. 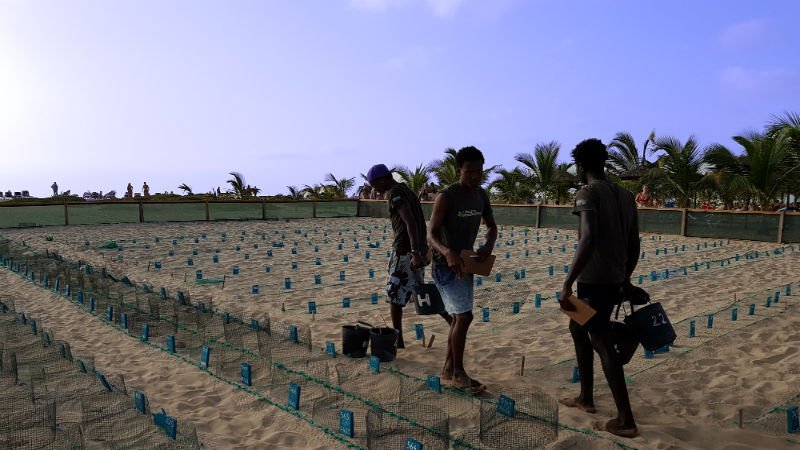 They search every night for new nests and bring the eggs to a safe location. To ensure that the eggs are not pillaged and the turtle does not die out. The locations are usually free to visit and nature conservationists are also present. Here the baby turtles are also born and you can witness this yourself. A very special experience! For example, a location is on the beach at the Rui hotel on the island of Sal. For other locations, it is advisable to check with the local population.