There is almost always a constant trade wind blowing on the Cape Verde islands. The wind that is present ensures that despite the relatively high temperatures it is perfect to stay on Cape Verde. And the wind provides ideal conditions for water sports. For example, Cape Verde belongs to the best places in the world for surfing.

The average maximum wind force is the speed of the wind at a height of 10 meters for 10 minutes and the average of that. This wind force is therefore an average and is lower than the real maximum wind speed. The maximum speed of the wind can be about 10 to 20 kilometers per hour higher.In the months of January through March there is on average the strongest wind in Cape Verde. Depending on the island and location, the wind force is between 5 and 7 on the Beaufort scale (29 – 61 km / h). On the basis of historical wind data, the peak of the wind force lies in week 3 of the year. In April and May the wind drops slightly and averages around 5 Beaufort (29 – 38 km / h). The atmosphere changes in the summer months and autumn. Between June and October the average wind force is therefore 3 to 4 Beaufort (12 – 28 km / h). Over the years it has been shown that in week 29 there is the lowest wind of the year. The wind increases again in the winter months. In November and December the wind force is on average 5 Beaufort (29 – 38 km / h). 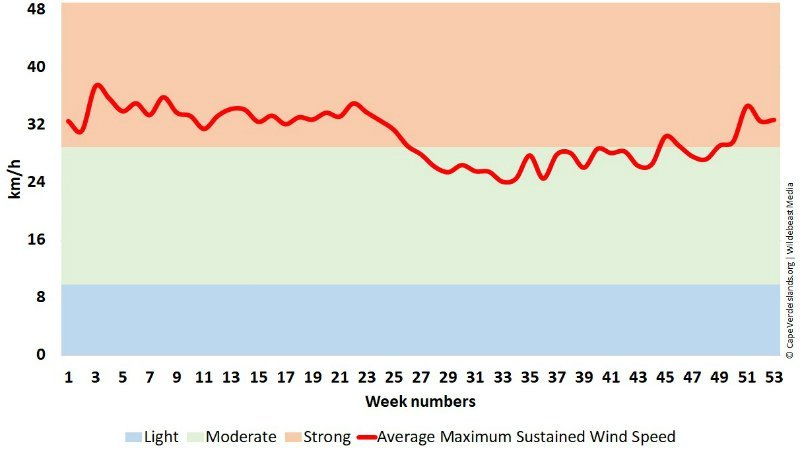 Note: wind speeds are highly dependent on the island. On the more flat islands such as Sal, Boavista and Maio you will experience more wind than on islands with mountains such as Santiago and Santo Antao. In addition, the location on the island in question also has an influence. Certain places are more sheltered than other places.

The climate in Cape Verde is strongly influenced by northeast trade winds. This wind is strongest between December and April. Two atmospheric factors influence this northeast wind trade. Firstly, the southwest monsoon, because of the location of the Cape Verde islands it brings with it little rain. Cape Verde is one of the driest countries in the world. Secondly, there is the harmattan wind. This wind comes from the Sahara (Africa) and is hot, dry and can bring some sand dust with it. The harmattan wind is also the reason that the flat islands of Sal, Boavista and Maio are desert-like. For that reason you will find beautiful sandy beaches and small dunes. The harmattan wind blows between the months of October and June.

The weather data come from the weather station 85940 (Sal, Cape Verde). The geographical coordinates of the weather station are: 16.73 degrees latitude, -22.95 degrees longitude and 54 feet high. The data is based on a large amount of data points, namely the historical weather reports on a daily basis from January 2012 up to and including March 2018. Weather data are sensitive to errors, failure and other defects. We can therefore not take responsibility for decisions made on the basis of these weather data.

Do you want to know more about the climate and weather in Cape Verde? On the following pages you will find more detailed information: