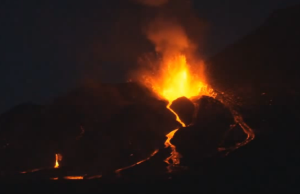 The volcano Pico do Fogo on the island of Fogo has become active on Sunday 23 November 2014 (update: eruption stopped on 7 February 2015). Before the eruption a couple of days of increased seismic activity was observed. The 1,700 people who live in Cha das Caldeiras, an old part of the crater, have been evacuated. This crater is a national park and is a very fertile agriculture area. It is also an important wine-growing region. Two villages of Cha das Caldeiras and a part of the agricultural land have been destroyed by the lava flows. The smoke plumes of the eruption can be observed in the remote area. Due to the danger of smoke and ash the airport is temporarily closed. The airport is because of smoke and ash danger temporarily closed. No fatalities have been reported.