Cape Verde is a top destination for surfers. There is almost a constant trade wind averaging 4 Beaufort wind force in the summer and 5 to 6 Beaufort in winter. This makes Cape Verde a paradise for surfing. For years it has been known as one of the best surfing locations in the world. Cape Verde has nearly 1,000 kilometers of coastline and the ‘swell’ is particularly powerful in winter and ideal for surfing. In addition, the sea temperature around the Cape Verde Islands is very pleasant. Whether you are a beginner or very advanced, everyone can go for a surf holiday on the tropical waters of Cape Verde. A paradise for lovers of watersports, from surfing, windsurfing to kite surfing. 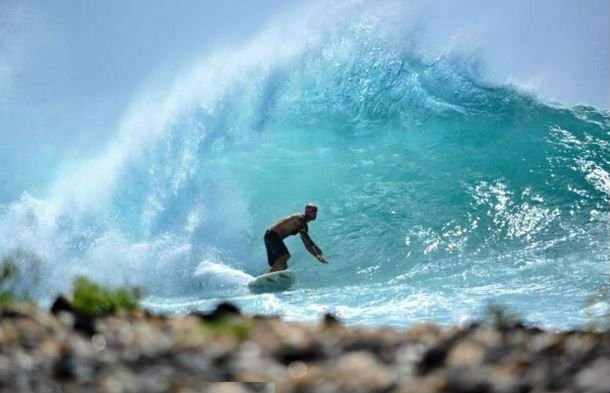 From October to June, the wind conditions for surfing in Cape Verde are very good. In October the wind increases namely to a wind speed of 4 to 5 Beaufort. January through March are the months when you can expect the strongest winds. On average then the wind increases from 5 to 7 Beaufort. According to statistics, 90% of the days in this period there is a good wind for surfing. At some surf spots in Cape Verde you can take waves of 1 to 3 meters high. You should come then in the surf season that runs from October to March.

Besides the good wind and wave conditions, it’s a bonus that the sea temperature is very pleasant. The sea temperature in Cape Verde is on average between 23 and 27 degrees Celsius. We recommend you to wear a shortie wetsuit (minimum 3mm). Besides a good blood circulation, it also provides additional protection from the tropical sun. The Cape Verdean weather is good in most periods of the year. The air temperature in summer is around 30 degrees and the sun radiation is often strong.

The latest wind and weather reports from Sal at Santa Maria beach can be found via WindGuru.cz. You can also use this data for other islands of the Cape Verde Islands to get a good indication of the conditions. The islands of the Cape Verde archipelago are all in the same geographical area, though there could be differerences. The wind, wave and weather report report give the forecast for the next three days based on time slots. Thus, changes can be predicted.

Surfing for young and old

In Cape Verde there come surfers with a lot of experience but also a lot of surfers in the category beginners. Because of the many surf locations and facilities, everyone can choose their own level. It is lovely on the water and you can enjoy it. And there is more than just surfing.

Most famous surfing locations have good surfing facilities. There are several surfing schools, shops and you can socialize with other surfers.

Which island is most suitable for surfing?

The 10 Cape Verde islands have an abundance of good surfing spots. Both for beginners and advanced surfers. The best surfing conditions for the northern islands (Santo Antao, Sao Vicente, Sao Nicolau, Sal and Boavista and uninhabited Santa Luzia) are in the winter. For the southern islands (Brava, Fogo, Santiago, Maio) weather conditions are better in summer when the swell there is stronger. The most famous island for surfing is Sal. It belongs to the best surfing places in the world and is known for its surfing spot Ponta Preta. The island of Boavista is also a popular surfing destination. Sao Vicente and Sao Nicolau also have great potential to become a top surfing destination in the future. The supporting surfing facilities like renting a surfboard here is still somewhat limited compared with Sal and Boavista.

It is no wonder that a World Cup kite surfing, surfing and windsurfing was held many times in this surfing paradise. It will not come as a surprise that many Cape Verdeans can surf well. They have with Mitu Monteiro a former number one kitesurfing among the ranks. He started in 2000 with surfing  in competition, first with the discipline windsurfing to switch later to kitesurfing. Mituu has already been 1x worldchampion (2008)and 3x vice worldchampion. In the following video a brief impressions of video below a brief impression of Mitu Monteiro with the kite for the coast of Sal.