For more than 50 years, the shipwreck MS Cabo Santa Maria has been lying off the coast of Boavista. Today it is an important sight and a symbol for Boavista. The rusting cargo ship lies in front of the enchanting coast, right by the Praia de Atlanta beach. Over the years, the sea has gradually dismantled the ship. The current state of the shipwreck and the location has something mysterious. Very impressive! 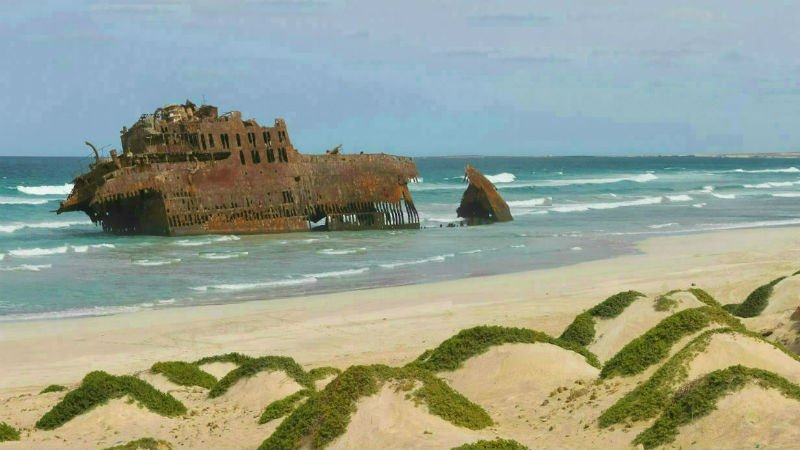 In 1968 the Spanish ship stranded off the coast at the Costa Boa Esperanca, a nature reserve on the island of Boavista in Cape Verde. With a tugboat they tried to recover the Cabo Santa Maria, but unfortunately this did succeed. The crew has fortunately remained unharmed. On board were several luxury items: sports cars, drinks, clothing and gifts from the Spanish dictator dictator Francisco Franco for his sponsors during the Spanish crisis. Finally, the cargo was unloaded. A large part of the population of Boavista was involved in the transfer of the goods and this took no less than a year.

The ship wreck gradually collapses. The sea has such an impact that after all these years a large part of the deck and the hull have disappeared. Now there is only a rusty carcass left, but this will eventually also be destroyed by the sea. Until then, this remains a unique place on Boavista. A source of inspiration for photographers.

The shipwreck lies on the north coast at Praia de Atalanta beach on the island of Boavista. The location is about 8 kilometers from the city of Sal Rei and 3 kilometers from Vigia. You can get there with a 4 × 4 car or just by walking.