The airline purser had said it: “when getting off do not forget your e-reader, iPad and phone, you will need them here on Sal”. And he was right. But that was just the first impression, because after we came back from the boat we stayed here for two more days and then you can feel that nice laid back atmosphere in the town, in the cafes, on the street and on the beach. Also saw carnival drum sessions with blackened (really!) Cape Verdeans to portray slaves. Nice walk along the beach and in the morning been running to the lighthouse and in the evening I joined a yoga class.

We looked forward to board the “Oosterschelde” (three-master sailboat). We saw her lying there, but where was the exact pick up place? Little confusion in the taxi, and we were not the only ones, but in the end we all came on board. On the “Oosterschelde” you are an assisting passenger. And when I am told what to do, I try to do it as well as possible. I can not really make myself useful, but I have made a name by climbing up with climbing harness and safety line to the mast. There is a lot of talking in the group about traveling and of course about sailing, because apart from us they are all sailors. A motorboat of course is very inferior. But they make as many mistakes or sometimes more than we do! Nice introduction at the first day of sailing, enjoyed being outdoors. The nice thing about this trip is that we sail a day and sometimes a night sailing along the Cape Verde islands and then make a day tour. 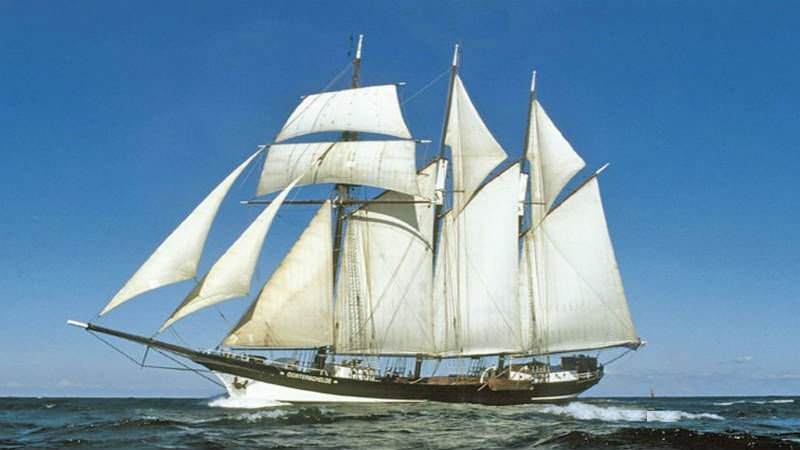 The first trip was on Santiago where we will also go there again after the sailing trip. With the dinghy (small boat) to the shore, women were busy selling fish and then we went to a village where the population once rebelled against the Catholic priests. Huts, really we are again really in Africa. In the travel books you find usually only the colored houses that are ready, but the grey unfinished houses are predominate. Further there are beautiful kapok trees and we visited a concentration camp for political prisoners of the Portuguese colonies.

Highlight for me anyway, the journey of two hours with a steep decent on  Santo Antao, the greenest island. We walked along a mule track, first in the fog and later through the green valley with small fields with sweet potatoes, cabbage and corn. To arrive in Santo Antao we had to make the crossing by ferry from Mindelo (nice town but unfortunately everything was closed because it was Sunday). Each island has indeed something special, but overall they are still rocky, sandy and quite bare, with also very nice places which of course we visited.

Sao Nicolau is the least touristic island but amazing! With Dragon Blood Tree’s (only grows at a few places), the bus ride in an Aluguer (local small bus) and an unexpected lunch at a beautiful location between rocks it is an amazing island. Hard to describe it in words, it was beautiful! Then we went to a grogue distillery.

Boavista is a desert island. It can be described as follows. Many new developments, it has a wooded dune landscape descending to a beautiful beach with a ship wreck. Desert, with roots above to catch dew. Climbing dunes wich are are fun to run down.

On the engine …unfortunately the last  part was straight into the wind. Pity! Unfortunately, also it was the last day. I have been outside a lot and just enjoyed it, sort of staring into the waves and an occasional chat with the crew and other passengers. Finally we have seen a whale shark, greyusg speckled, quite rare, everyone was elated! Finally, a barbecue with dancing, fun, thanks to the crew! Next day said a little sad farewell to the crew and passengers, and occasionally exchanged some email addresses. Who knows, we will see some of them at the event Sail in Amsterdam this year.

This travelogue is written by Lidwien and is a combination of two separate parts. She visited in January / February sailing with a group of friends a number of islands in the Cape Verde archipelago. Would you like to share your experiences and / or suggestions? Write a nice travelogue and send it to us.