In October, at the start of the tourist season, I went to the Cape Verde Islands with a friend for ten days. Our proposed plan was to visit three islands, to be able to discover the famous diversity of Cape Verde.

After a flight of only six hours we arrived at Sal where we passed pretty quickly immigration and customs. Despite the small size of the island, it surprised me that the ride to our apartment still took half an hour. But hey, vacation! Our apartment had a nice pool surrounded by all kinds of colorful flowers and overlooking the ocean. Absolutely not annoying to spend some days there.

Our second day we spent exploring the barren island with a chartered taxi. Our taxi driver showed us some sights on Sal. First we went to Pedra de Lume, the old salt mines of Sal which the island owes its name to. On arrival you walk through the entrance and then get into a sort of crater where several salt baths can be seen in various stages of evaporation. In some pools you can swim, well: float. You can also have a mud treatment, but since I found the salty mud between my toes already slippery enough, we did just leave this.

After soaking, we drove to Barracuda – “the blue eye”, a hole in a rock with the sea flowing underneath. Fortunately, we were there at the right time, for only 1-2 hours a day the sun shines right into the hole causing the blue eye. Special to see!

After our day trip we went to have lunch in the charming village of Santa Maria and then enjoyed an afternoon on the beautiful white beach.

Because we did not want lying on the beach for ten days, we flew the next day to Santiago, the cradle of Cape Verde. Praia, the capital of the island is partly situated on a plateau and partly around the plateau. Our hotel was on the platform which offered us walking through the old town a nice view of the city.

Near Praia is the original capital of the island, Cidade Velha. On top of a mountain is the fortress that the Portuguese used to defend their territory against other seafaring nations that wanted to capture the Cape Verde islands (they did not even know of how many islands it consisted exactly at that time). At the fort, we enjoyed a tour of a Cape Verdean boy who could tell about the history of the fort, the area and the lower town. The access money that you pay is for the restoration of this magnificent fort.

From the fort you can descend to the villa but also by a sort of path for pigs. The town is on the UNESCO World Heritage Site which means you really feel like being in a kind of open air museum. But one where the air conditioning would have to be put higher because, although it is a fine stay in Praia, the temperature in Cidade Velha is far above the 30-35 degrees. Tough we had wanted to see in the old town, the temperature made us watch mainly people from an idyllic beach and ocean facing terrace. In order to be more culturally busy we had lunch with the still somewhat unexpected Cachupa, the delicious traditional bean and corn dish of Cape Verde.

The next day, we left Praia with an aluguer, a van for 14 people that unfortunately only leaves when it is full, for Assomada. Assomada is halfway between the island of Santiago and according to travel guides the ride of half an hour alone would worth the effort. That was certainly true! In contrast to the relatively flat landscape of Sal the interior of Santiago is very mountainous, so the ride to Assomada led us through several canyons and peaks in a green landscape (another difference with Sal, where I think there are more cows and goats than shrubs and trees).

A point where I have to disagree with the guides are the sights of Assomada itself: the African market should be very special, but personally I have seen other markets that were nicer. Perhaps because the market is actually just a daily fruit and vegetable market. Because we did not have a good map of Assomada and we did not want to go too far from the stop of the aluguer, we returned after lunch towards Praia.

The next morning, very early we went for the third time to the airport to fly to the volcanic island of Fogo. Since we already arrived at 8 o’clock in the morning in the capital Sao Felipe and we therefore had plenty of time to get to the villages in the Cha das Caldeira, we first looked around the town itself. What a beautiful brightly colored spot with lovely people strolling through the streets. And I still haven not mentioned the bizarre black beaches of volcanic ash. Perhaps the most beautiful place I have seen in Cape Verde. If we would have had the time, I would have liked to stay here an extra day.

In the early afternoon we went by taxi to Cha das Caldeira, a ride that just seems to lead higher, until you come at the highest point and the way leads you zigzag into the Caldeira. The route to the two villages in the Caldeira leads past the lava flows from the eruption of 1995, where our taxi driver gave us the chance to look around at the stunning scenery. I had previously been at or near a volcano, but I had not seen the hardened lava flows before. It made us even more looking forward to the next day when we would climb the volcano Pico do Fogo.

The next morning when we had to be ready at six o’clock to begin the ascent, we thought about it a bit different by now. With our guide we started from Cha das Caldeira towards the foot of the volcano. The first part is pretty easy on flat terrain along the fields of the farmers in the area. Then, however, the route begins to rise on various sorts if ground such as large rocks, ash and gravel. It was really scrambling hands and heeft now and then, but the view during the breaks became more fascinating as we came higher. At one point we were even above the clouds! Just at the moment that I began to wonder how far we still had to go, I had just forbidden myself to look up constantely. This was better for my balance and less difficult. Our guide pointed at the top: we only had a meter or 10 to go!

Once on the edge of the crater, we could not get enough of the view, but we could obviously not remain there forever. Our guide gave us the choice to go down the short route or first go to the highest point of the crater and then descend through the second crater of the volcano. Now we were there anyway we decided then to take the long route. That meant scramble up furhter before having to descend. That was the part that I really began to wonder what I had begun. When I climb a mountain, I namely always forget that to descend I find appalling. Anyway, I had little choice. The first part of the descent is about large pieces of rock and slipping gravel, but if you’ve overcome that piece then you come to a hill of volcanic ash. If you know the technique a little, you can run down the slope at full speed, because at every step you sink to mid calf in the ash layer away. It appeared I was not vere good, because every few steps I fell on my ass again, but that just gave me more time to enjoy the view. 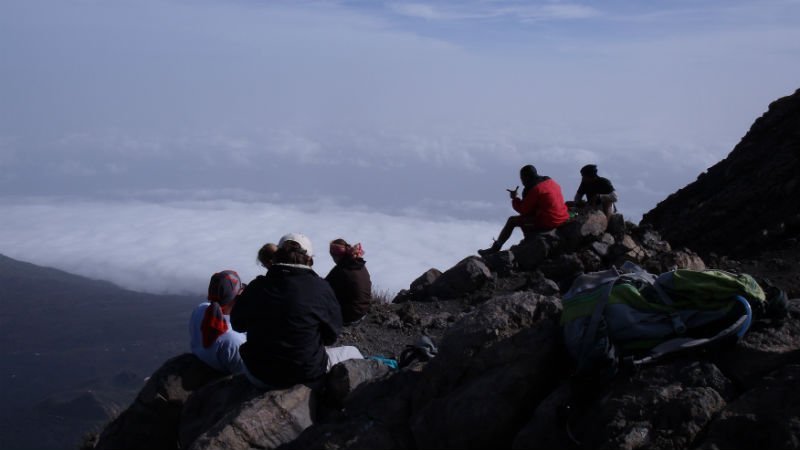 Upon descending we passed the small crater of the volcano. This crater was formed during the eruption of 1995 and is completely different from the large crater. The large crater is a big gaping hole you do not want to fall into, but there is nothing to see. The small crater is a collection of stones with different colors. This crater was really hot. You would certainly not want to go through it. But that was  just the way our guide had in mind.

Through the unreal landscape of the crater we eventually ended up across the fields to walk back to our guesthouse. We have not done more than lunch the rest of the day, wash off the black dust and rest because we were exhausted after climbing up after six hours and valleys.

Resting on Sal and return home

The next morning we had muscle pain and we had to get up at 7am to get our flights back to Sal. Before flying to the Netherlands we had allowed ourselves a few days at the beach after all the hardships. These days, beach, sun and relaxation were the perfect end to a fantastic tour of Cape Verde. 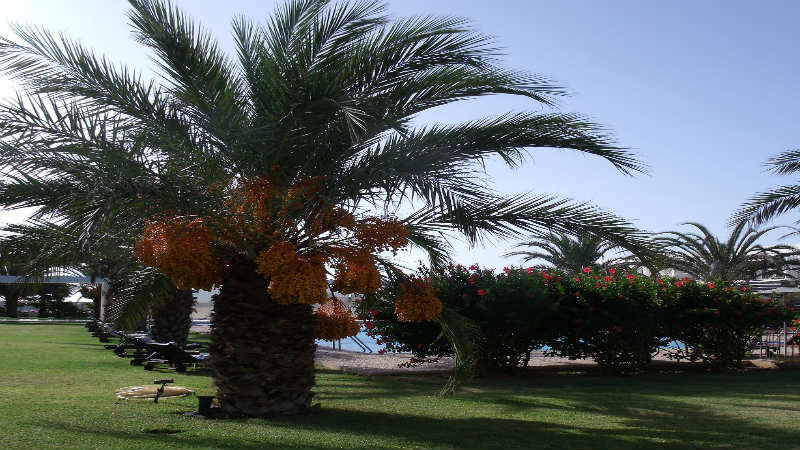 This travel report and photos were submitted by Ms Carmen (33) from Utrecht, the Netherlands. Would you like to share your experiences and / or suggestions? Write about your nice trip and send us this to us please.